Here are some cosy authors and the locations where you can visit them in statue form. 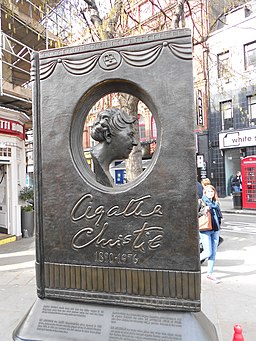 The Agatha Christie Memorial has been located on the corner of Great Newport Street and Cranbourn Street near Covent Garden, London since 2012.

The memorial was the brainchild of Matthew Prichard (Agatha Christie’s Godson) and Stephen Waley-Cohen (Producer of The Mousetrap since 1994) and was designed by sculptor Ben Twiston-Davies.

The location in the heart of London’s theatre district is a reflection of her work as a playwright.

Shaped like a book with a bust of Agatha Christie at its centre, the sculpture also references her work as an author and highlights some of her many characters.

You can read the full text of what’s written on the base of the sculpture at it’s official website.

The brass statue of Dorothy L Sayers was sculpted by John Doubleday and stands in Newland Street, Witham, opposite the Witham Library.

A reference collection of Sayers’ works is held in Witham Library, in a room known as the Dorothy L Sayers Centre.

Further along Newland Street is the house where she lived and wrote from 1929 onwards, identifiable by a Blue Plaque on the front wall. 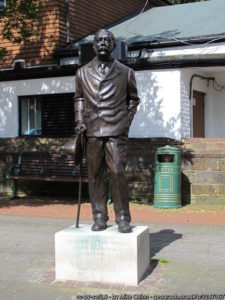 The bronze full-length statue of Arthur Conan Doyle is located on the corner of Beacon Road and London Road in Crowborough.

It was installed in 2001 and was created by local sculptor David Cornell.

The inscription on the front of its stone plinth reads:

Conan Doyle moved to Windlesham on the outskirts of Crowborough following his marriage in 1907 and lived there for the remainder of his life.
Know of any more cosy author statues?

Please let me know the details in the comments below and I’ll add them to this list.