This lovely series saw Brother Cadfael, a Benedictine monk and herbalist of Shrewsbury Abbey, solving mysteries and helping the folk of medieval Shrewsbury.

Ellis Peters (a pen name of Edith Pargeter) wrote 20 novels and a collection of short stories featuring Cadfael. He was also brought to television in a series with Derek Jacobi as Cadfael in the 1990s.

The books contain many details of Shrewsbury in Cadfael’s world, and echoes of these are still to be found in the town today.

Shrewsbury is an English market town near the border with Wales. 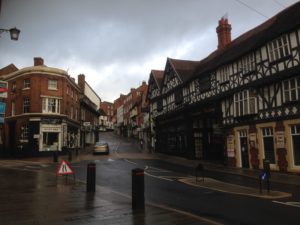 The historical town centre sits in a loop of the River Severn, and contains many heritage listed buildings, as well as a retail precinct.

Shrewsbury is also known as the birthplace of Charles Darwin.

I travelled up to Shrewsbury from London on the train, a journey of around two and a half hours.

My first stop was Shrewsbury Castle, featured in the Cadfael novel One Corpse Too Many. The castle is directly above the train station, and I could imagine Cadfael tending to the bodies below, following the siege of the castle in 1138. 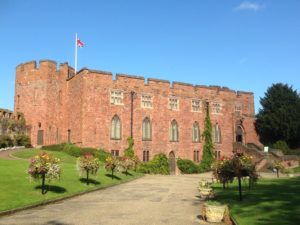 Made of red sandstone, Shrewsbury Castle has had many modifications since Cadfael’s time, and is a heritage listed building.

It’s currently the home of the Shropshire Regimental Museum, which is open to the public at certain times of year.

After enjoying the castle grounds, I then walked into the centre of town to visit the Shrewsbury Visitor Information Centre.

I was on a mission to buy a booklet I’d been reading about for years titled In the footsteps of Brother Cadfael. It covers three walks around the town based on locations from the Cadfael books; around the Abbey, up to St Giles Church, and around the town itself. I very happily paid £2 to purchase a copy.

It was now time to visit the home of Brother Cadfael, formally known as the Abbey Church of Saint Peter and Saint Paul, Shrewsbury. To the south-east of the town I walked along Wyle Cop to where the English bridge crosses the River Severn, and Shrewsbury Abbey was ahead of me. 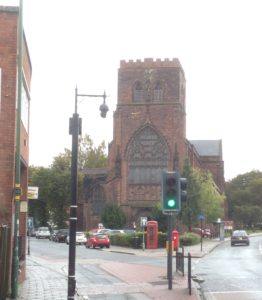 I’d seen photos of the Abbey before, but it was still surprising to see it surrounded by such everyday modern things. Traffic lights and bright red phone and post boxes. A street sign pointed cars to the Foregate Car Park.

The Abbey was founded as a Benedictine Monastery in 1083, but much of the building was destroyed during the 16th century. What remains continues in use as a Parish Church.

I saw a sign inviting all to enter, and after a little hesitation I did.

As I pushed open the door, a polite gentleman asked if I was interested in the Abbey and handed me a laminated card with a floor plan and details of interesting items to view.

The choir was practicing for a sung Eucharist and their lovely notes filled the air, soaring to the roof. I looked discreetly at the displayed items, all the while enjoying the uplifting melodies and picturing Brother Cadfael in his regular place among the monks. 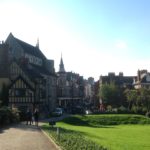 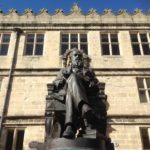 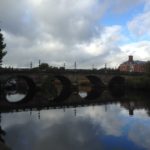 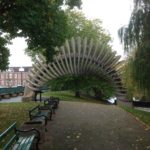 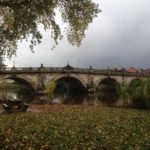 My visit to Cadfael’s Shrewsbury was too short, and I plan on returning as there are so many more locations to see.

If you’ve arrived in Shrewsbury by car, Shropshire tourism has a website to guide you in exploring further around the area: Brother Cadfael Car Trails in the Shropshire Countryside

END_OF_DOCUMENT_TOKEN_TO_BE_REPLACED

Pie in the Sky (Hemel Hempstead)

Pie in the Sky restaurant exteriors at Hemel Hempstead

END_OF_DOCUMENT_TOKEN_TO_BE_REPLACED

M.C. Beaton’s Constable Hamish Macbeth in the Highlands of Scotland

END_OF_DOCUMENT_TOKEN_TO_BE_REPLACED

One thought on “Brother Cadfael (Shrewsbury)”