The adventures of Hamish Macbeth will be familiar to many from the television series starring Robert Carlyle, produced from 1995 to 1997. Hamish is a Police Constable in the Scottish Highlands, where he maintains his own brand of law and order in a village filled with many interesting characters.

M.C. Beaton is the pen name of Marion Chesney, a prolific English author who has so far penned 34 novels in the Hamish Macbeth series of books (titles below). Her other works include the popular Agatha Raisin and Edwardian Murder Mystery series.

The Hamish Macbeth books are set in the fictional fishing village of Lochdubh (meaning black lake in Gaelic). The picturesque village of Plockton on the shores of Loch Carron brought Lochdubh to life on TV.

The closest large town to Plockton is Inverness, and I arrived there first thing in the morning on the overnight train from London. This was a fabulous way to travel, as I arrived having spent a comfortable night in a sleeper berth and could catch the next train directly to Plockton.

The journey time from Inverness by train is just under two and a half hours.

From Plockton train station it’s around 15 minutes walk downhill to the village. Heading down Innes Street towards Harbour Street, the view of the water opens up before you. 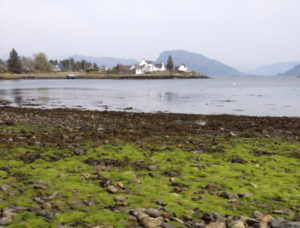 On your right is the filming location for Rory Campbell’s shop, which now houses the Plockton Craft Shop. Turning left you’ll see the building that served as the exterior of the Stag Bar; its former signage now a plain whitewashed wall.

Harbour Street follows the sweep of the shoreline around to the headland and is lined with a perfect row of cottages facing the water. Keep walking along the street until you reach a red telephone box, and then turn right. Ahead of you is the causeway – as long as the tide isn’t in!

At the other end of the causeway (or along Harbour Street and up Cooper Street if the causeway is under water) you’ll see the house that acted as Hamish’s Police Station. It’s clearly visible from most places on the waterfront as it sits right out on the headland. 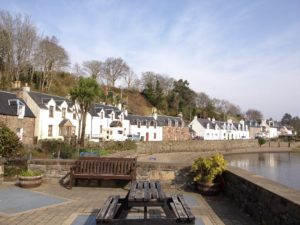 Having stopped in at the local shop, I enjoyed a picnic lunch looking out over the harbour. The village was peaceful, with very few people around.

My visit was in April and the early spring weather was surprisingly warm. Plockton’s climate is influenced by the warm waters of the Gulf Stream and can be milder than expected. 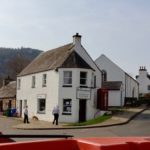 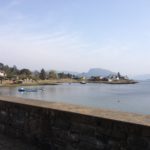 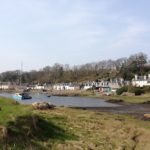 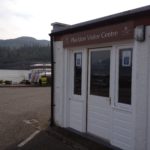 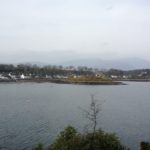 Things to do in Plockton

Details of the 20 episode in the TV Series on IMDb.com

Scenes from the 1973 movie The Wicker Man and an episode of the TV series Inspector Alleyn Mysteries were also filmed in Plockton.

END_OF_DOCUMENT_TOKEN_TO_BE_REPLACED

Pie in the Sky (Hemel Hempstead)

Pie in the Sky restaurant exteriors at Hemel Hempstead

END_OF_DOCUMENT_TOKEN_TO_BE_REPLACED

One thought on “Hamish Macbeth (Plockton)”